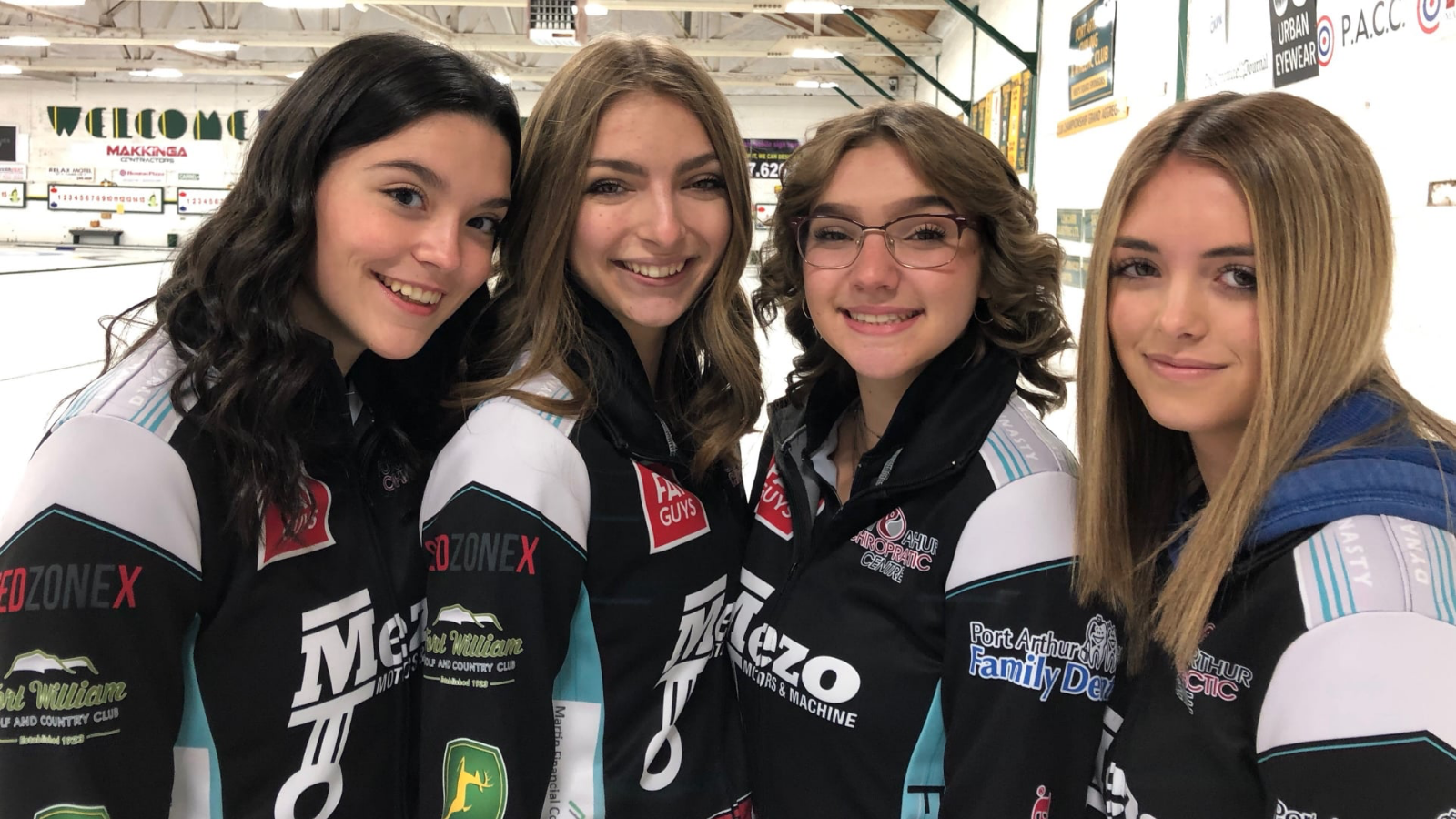 The Britney Malette rink pictured here - Jaimie Sinclair and Karli Hicklin (back) and Britney Malette and Maddy Hollins (front) have aspirations that they can get to a national championship one day.

The young U18 rink that plays out of the Port Arthur Curling Club coached by Paul Carr are watching the Scotties Tournament of Hearts intently from the Calgary bubble this week.

Team Malette are in their second year together, but their first in the Tbaytel Major League of Curling, with their goal to represent Northern Ontario at U18 nationals next year in Timmins.

The Malette rink are one of three junior teams playing in the Tbaytel Major League of Curling this season. When play was suspended back in December, the young rookie team had yet to win a game sitting at the bottom of the standings at 0-8.

They knew they would pressed to challenge their more seasoned opponents. However, the team is hoping league play resumes so they can shoot for that inclusive first win. Their remaining games are against Mike Pozihun, Dallas Burgess, Frank Morissette and Trevor Bonot to complete the round robin schedule.

According to their veteran coach Paul Carr, the goal was to learn from the other major league teams and gain knowledge as to how to become a better team.

“I would say they’ve met and exceeded our goals, said Carr who has been mentoring young curlers at the junior, college and university levels for years.
“The experience playing competitive games has allowed the girls to gain knowledge on different aspects of the game, and ways to better our game as a team. We’ve also come a long way from our first major league game. At first, we were off the ice after 5 ends and now we have played a few full 8 end games!” add Carr, noting that as major league rookies they will ecstatic to secure that first win.

Malette, in her fifth year curling, says she started curling because her step dad Tyler Oinonen was a curler and introduced her to the game. Oinonen knows a bit about game as he was the lead on the Jeff Currie rink who won the Canadian Junior Men’s Championship in 1996. The Port Arthur Curling Club rink included Greg Given and Andrew Mikkelsen.

“The friendships I make on the ice during competitions or even the bonds made with my teammates is definitely what I enjoy most about curling, said Malette, who looks at Krista McCarville as one of the most highly ranked teams to beat among the major league teams.

Maddy Hollins is the third on the team. She has been involved in the game for 13 years starting when she was four.

The 17-year-old Hollins, a student at St. Ignatius High School started curling because many of her family members curl. Her dad Greg is the lead on the Bryan Burgess rink while her brother and grandmother are also curlers.

“I love the atmosphere of the curling club. Everyone is always so nice and everyone is there to have fun. I also love that I get to play the sport with some of my closest friends, said Hollins lists her favourite curler as Anna Hasselborg.

The second on the team is Karli Hicklin who started in little rocks at Fort William Curling Club and has curled for nine years.

The 16-year-old Hammarskjold High School student says she got introduced to the game hanging around the curling club while her brother was curling pointing out that the social aspect of the game is what she enjoys the most about curling.

At age 13, lead Jaimie Sinclair is the youngest member on the team and it should be no surprise that she is a curler.

Like the other girls on the team curling runs in their families. Jaimie’s father was one of Thunder Bay’s top competitive curlers earning a Purple Heart and representing Northern Ontario at the 1998 Brier as the third for Bruce Melville with Dale Wiersema and Larry Rathje the other members on the team.

The grade student at Pope John Paul Intermediate School says she is proud of her dad and his Brier experience and admits it is the reason she started curling. However, she adds” I really enjoy the sport and meeting new people”, noting she really would like to beat Al Hackner because he has won many championships.

The Malette rink are the second junior girls team to use the Tbaytel Major League to develop their skills for a shot at representing Northern Ontario at a Canadian junior championship. The Hailey Beaudry rink from the Port Arthur Curling Club realized their goal competing in the Canadian Juniors in 2018 in Shawinigan, Quebec.

New grant program will help those who are struggling during COVID-19
March 19, 2021
Go to Top