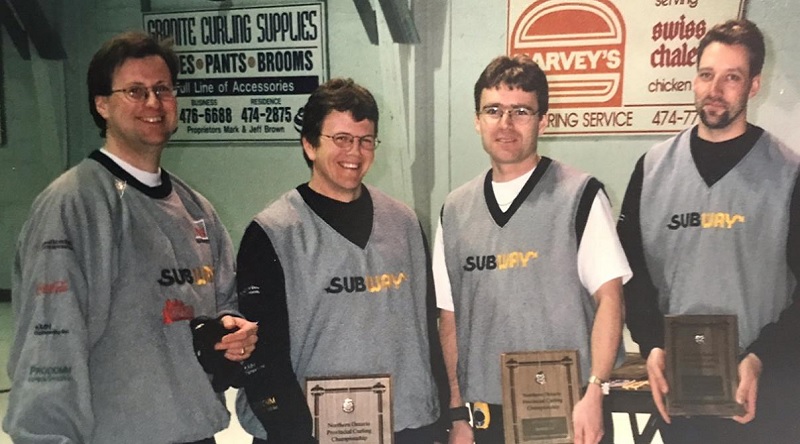 The Mike Desilets rink (Desilets, Scott Henderson, Dale Wiersema, Bill Peloza) from the Fort William Curling Club has gone full circle from Junior Champions to Senior Champions and will represent Northern Ontario at the Everest Canadian Senior Curling Championships next week. Mike was gracious enough to provide the following information about his team.

“10 years ago, I moved west from Thunder Bay for work and with 4 young children and a busy job, curling was put on hold. I was blessed with a great opportunity to move my family back to Thunder Bay last year. Just like that, the curling community welcomed me with open arms; it was like I never left.

It was funny to me last year that the most commonly asked question was ‘Can you play Seniors yet?’ Then I realized ‘Wow I will be able to play Seniors next year; how did that happen?’.

I am playing with good long time friends. Scott and I played together from 2001 - 2008, and in the Brier in 2003 and have both represented FWCC at Junior and now Senior Men’s levels. I have included a photo of us 19 years ago when the same group of guys lost the provincial final in North Bay in 2001 to Al Hackner.”

Mike has represented NO in 3 Juniors as 3rd for Craig Kochan - they lost the Canadian Final in 1988; 1 Brier as 2nd for Scott Henderson; and now this year's Senior National. Dale played second for Bruce Melville in the 1998 Brier, and this is Bill Peloza's first National after being a runner-up in Men's and Seniors.

“I have a more pragmatic approach after being away from the game. Playing in a national is a privilege and there is no guarantee that you will ever get back. Life events, or just never winning that last game, are always impediments. I will be really enjoying the journey and the event with my good friends and team mates. It will be somewhat of a reunion as many of the participants of this year's event we have competed against in past National or World Curling tour events.”