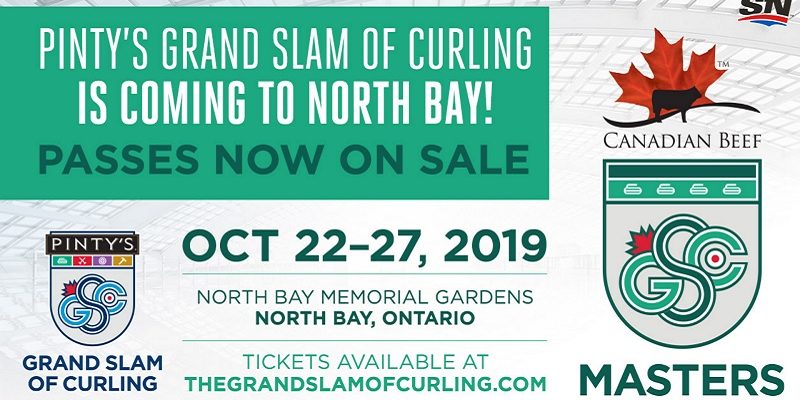 It’s official. Sportsnet announced at 10:00am EST on Tuesday March 5th that the Pinty’s Grand Slam of Curling will be opening their 2019-2020 season with a visit North Bay in the fall where they will set the stage for one of the original and most prestigious tournaments on the World Curling Tour.

Full event passes for the October 22nd – 27th Canadian Beef Masters (valued at $230) are on sale now from Battalion Headquarters inside North Bay Memorial Gardens, 100 Chippewa Street West. Curling fans may visit the second-floor office Monday - Friday between 8:30am - 4:30pm to select their seats or call 705-495-8603 ext. 2700. Weekend passes and single game tickets will go on sale at a later date.

Given the overwhelming success of the 2018 Ford World Women’s Curling Championship, the local organizing committee is urging supporters to act quickly as not to miss this incredible opportunity to see the top fifteen men’s and women’s teams in the world compete for a total prize purse of $250,000.

Participating teams will be announced in early Fall 2019 based on the World Curling Tour’s order of merit ranking system (click here to view see current standings) while it is guaranteed that some of the all-time best players to have ever graced the game will be in attendance including Canadian, World and Olympic champions.

Organizers are now pursuing local sponsorship opportunities and accepting requests to volunteer. Should you have an interest in either please do not hesitate to call the North Bay Granite Club at 705-472-6740 or email info@northbaycurling.com.